One wall is a reflection of who I am.

A sage-green wall covered with framed photographs of my family, frozen in time. Scattered among the living are snapshots of deceased ancestors from whence I came. They stare back at me with stern, sepia-colored faces. Next to these are plaques commending military service, certificates of appreciation, contests won.

Commonly known as an “I love Me Wall,” is it a showcase of my life? Or a subliminal need to affirm self-worth? No different than hanging children’s elementary artwork on the refrigerator.

The other wall is a reminder of whose I am.

Bible passages captured on canvas ages ago with brushstrokes of oil paint. These art works were gifts, reminders of God’s love and mercy towards me.

See what GOD has done! And doing still…..

Why look for my worth in “things” represented on the “love me” wall?

When the ONE in whom I find my worth is revealed in the scripture behind these paintings.

A ragged, wretched son kneels in repentance at His father’s feet after squandering his inheritance. In his father’s welcoming arms, he receives forgiveness while the older brother watches in contempt. 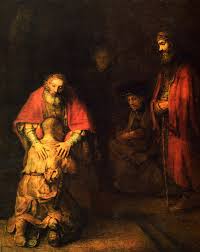 “I will get up and go to my father, and will say to him, ‘Father, I have sinned against heaven, and in your sight; I am no longer worthy to be called your son…’

“But while he was still a long way off, his father saw him, and felt compassion for him, and ran and embraced him and kissed him.” (Luke 15:19, 20)

Head bowed, Jesus is on his knees washing the dusty, calloused feet of Simon Peter while the apostles watch in disbelief.

“Then He poured water into the basin, and began to wash the disciples’ feet and to wipe them with the towel…And so He came to Simon Peter who said to Him, ‘Lord, do You wash my feet?’… Jesus answered him, ‘If I do not wash you, you have no part with Me.’” (John 13:5-8)

Do likewise, He challenges the apostles. “Love one another as I have loved you.”

One wall focuses on me.

The other wall points to the Lord.

The only ONE who is worthy to be praised.