The house is robed in darkness when I slip away from the warmth of my bed and my slumbering husband. I’d rather brew a cup of tea and pray than toss and turn.

I weave my way through the dark and around the furniture until I find the kitchen light. While tea leaves steep, I notice my hungry cat waiting at the back door.

Open a can of food for her, open the Bible for me.

I’m not a morning person, but I love the silence where God is able to speak without interruptions.

If only I can keep my mind from distractions. My year that began slow has picked up speed. The winds are changing.

I tell myself “rejoice in the Lord” because my joy is not based on What is happening in my life, but WHO is ever present.

El Roi, the God who sees me, even in the dark while I sip tea.

How odd…or is it…that I open my Bible to Psalm 143 where my words were once scrawled in the margin: February 2001: anxiety attack and winter depression.

What happened long ago that caused me to underline emotions that King David experienced: “persecuted, crushed, overwhelmed.”

I can’t remember why those emotions held me hostage, but the solution remains underlined.

“I meditate on all Thy doings; I muse on the work of Thy hands. I stretch out my hands to Thee; my soul longs for Thee as a parched land.” (verses 5,6)

On that winter morning, I lived in dark places. (vs.3)

And bring my soul out of trouble.

Even now, as I write these words, night has slipped away. Daylight is here. And on my window sill, a cross with the words from Jeremiah 29:11, “For I know the plans I have for you…to give you hope and a future.” 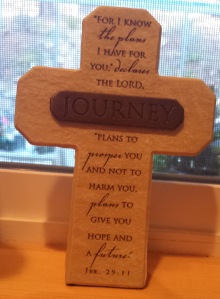 If anxious thoughts woke me, they are gone.  Not because my circumstances changed, or God fixed my problems overnight.

My soul is at rest because the Lord is my hope and refuge.

And He never changes…not even in this.

Autumn is here, and my mind travels back in time to another October in the year, B.C. (before children), when my husband and I first moved to California. One weekend, we visited Yosemite National Park.

Being young and spontaneous, we didn’t make campsite reservations. So we had to pitch our two-man pup tent outside the park in the National Forest.

There was nothing around us, but trees, dirt, and critters that went BOO in the night.

Bears rule in Yosemite. And there was no lack of signs warnings us: DON’T FEED THE BEARS. DON’T LEAVE FOOD IN YOUR TENT. DON’T LEAVE BACKPACKS UNATTENDED.

Imagine my fright when I’m lying in my sleeping bag, and I hear noise: something rustling in the bushes, footsteps that sounded like Tyrannosaurus Rex, and heavy breathing that wasn’t coming from my husband who was sound asleep.

The only thing between me and the noise was a tent wall…a thin piece of nylon material held up by plastic, collapsible poles. Trust me, if a bear wanted to harm us, he didn’t have to claw his way through the zippered door panel. He could have sat on our tent and smothered us to death.

Frantic, I woke my husband. “There’s a bear outside the tent.”

“Maybe he can smell food on our clothes.”

“What if it’s someone with a gun who wants to steal our car?”

Maybe trusting my husband was a false sense of security, but I took my husband at his word. I closed my eyes and slept like a baby all night long.

When I woke up the next morning I was rested.

But my unshaven husband had dark bags beneath his eyes. He hadn’t slept a wink. Listening to the night noises, he’d kept a death grip on the ax, ready to defend me.

Now Husband isn’t all powerful like the Lord, but He loves me. And that night gave me a glimpse of what it means to “rest in the Lord.”

When the dark closes in on me, and fear troubles my soul, I cast my burdens onto the Lord, and rest.