There’s a giant hole in my basement ceiling, situated below my kitchen. A plumber ripped out the drywall ceiling in search of a leaking pipe. Sure enough there was a plastic vent pipe with three holes, compliments of a rat we’d caught in the crawl space two years earlier. 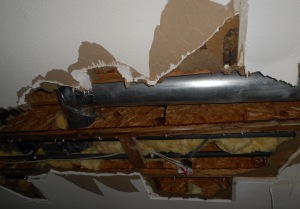 The plumber said we wouldn’t have known there were holes in the vent pipe, if it hadn’t been for a blockage in a different pipe.

Instead of the water backing up into the kitchen sink, it found the holes of least resistance and flooded the ceiling.

What does that scenario have to do with eternal significance?

Because the image of those exposed pipes in the ceiling flooded my heart, reminding me….

When I don’t deal with hidden sin in my heart, especially a grievance against someone, foul words will eventually pour out of my mouth.

The problem isn’t my lips or mouth, it’s my heart.

“But the things that come out of a person’s mouth come from the heart, and these defile them.” (Matthew 15:18)

“Above all else, guard your heart, for everything you do flows from it.” (Proverbs 4:23)

Un-confessed sin towards others creates the perfect environment for bitterness to take root. Like the blockage in my water pipe, my thoughts and attitudes fester, clog my arteries. I may not be aware of my heart’s condition until, BAM!

Someone triggers my emotions.

Releasing a barrage of unkind words, or a barb.

Exposing my unhealed wounds like the holes in a pipe, and all because I had a blockage in my heart called un-forgiveness.

Once spoken, hateful words are like releasing a bag of feathers into the wind. There is no getting them back.

But sometimes, unkind words are subtle. People have to read between the lines.

“Sideways,” a friend told me. “When we’re not forthright, everything comes out sideways.”

Like a verbal slap that comes from left field, but aimed to hit home.

Grumbling or murmuring behind someone’s back.

An “innocent” intentional action to make a point.

Passive aggressive is another label for not dealing honestly with others when we’re offended, or upset.

Fortunately, my heart was exposed last week along with my kitchen pipes. Now, everything is cleared, clean, in working order.

And the drywall man is here to repair the gutted ceiling.

Should I tell him what I learned, even in this?

A large, purple plastic bowl lay upside down on the cement slab of our back patio. The bowl had been there for several days, untouched like the pile of discarded, mud-caked sneakers next to the back door.

Assuming the old bowl had toppled from the patio table, I stooped to pick it up.

Beneath the purple bowl was a wet mess of rotting … cat puke.

My cat pleads the Fifth Amendment, but Someone covered the puke rather than clean it up.

“I didn’t want anyone to step into the mess,” Someone later explained.

Covered it up? Were you ever planning to clean it up?

But even in this ….disgusting cat puke hidden beneath a purple bowl, I had an AHA moment about SIN.

Shuddered to think people, even those closest to me, might look “beneath my bowl” and see my disgusting sin.

Lips sealed, fingers crossed, do I hide sin behind good works? Masquerade as a good Christian, wearing blinders rather than confront my sin?

Out of sight, out of mind, I fool myself.

“He that covers his sins shall not prosper; but whoever confesses and forsakes them shall have mercy” (Proverbs 28: 13).

King David, a man after God’s own heart, committed adultery and murder. When David covered his sin, he suffered.

“When I kept silent, my bones grew old through my groaning all the day long. For day and night Your hand was heavy upon me; my vitality was turned into the drought of summer” (Psalm 32:4)

When David came to his senses, he humbly came before the Lord.

“I acknowledged my sin to You, and my iniquity I have not hidden. I said, ‘I will confess my transgressions to the Lord,’ and you forgave the iniquity of my heart” (verse 5).

Heaven forbid I cover my sin by comparing myself with others; pat myself on the back. I’m not as bad as….

“Our Lord taught repeatedly that sin bottled up on the inside, concealed from everyone else’s view, carries the same guilt as sin that manifests itself in the worst forms of ungodly behavior (Matt. 5:21-30).” ~ John MacAuthur

The only remedy for sin involves uncovering our guilt.

“If we confess our sins, He is faithful and just to forgive us ours sins and to cleanse us from all unrighteousness” (1 John 1:9).