My repertoire of culinary fiasco could fill a cookbook.Oddly enough, I didn’t let it stop me from joining a Dinner club two years ago. I warned the other couples I couldn’t cook, but they needed some comic relief.

Last week, we chose to make a Cajun meal. They asked me to prepare a New Orleans  dessert called Bananas Foster. It’s easy (heard that one before) and requires few ingredients. Sliced bananas, brown sugar, cinnamon, fresh lemon juice, and rum. Bananas Foster is traditionally flambeed before serving, and the alcohol in the sauce is allowed to burn until the flames die down.

Knowing I couldn’t make dessert ahead of time was nerve wracking. I underlined the words: “Before flambeing, make sure to roll up long shirtsleeves, and tie back hair.”

The night of the dinner party, we sat at a long dining table covered in white cloth and ate like King Neptune: crab cakes, shrimp salad, seafood gumbo, and jambalaya. Someone requested dessert. I felt like a pressure cooker as I stood at the stove with seven people breathing down my neck, asking questions.

I heated the heavy-bottomed skillet and listened to the oohs and aah’s of my audience as I sliced, sprinkled, stirred, and squeezed ingredients into the warm pan. Then the moment they’d been waiting for….. 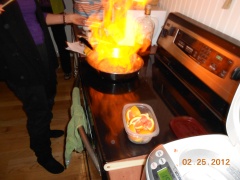 They aimed cameras as I poured the rum into the skillet and waved a lit match over the pan. Fumes ignited and burst into a roaring flame higher than my head.

One man grabbed a fire extinguisher while the hostess grabbed a straw ornament hanging behind the stove.

While I, with the flare of New Orleans chef, Emeril Lagasse, gently shook the skillet to distribute the blue-tipped flame over the entire pan. Within seconds, the  flames subsided, leaving a caramelized sauce in which I sauteed sliced bananas to a glossy, golden brown.

Laughter and applause filled the kitchen as I poured the sauce into bowls of vanilla ice cream.Bananas Foster was an exclamation mark of the night.

And I was hailed by my fellow chefs as a member in good standing!

Yum, nothing like the round flavor of victory, instead of the bitter taste of…….

Compare myself to women who bake from scratch, grow herb gardens, and serve gourmet meals on china plates. No wonder I label myself, laugh at myself, stop believing I can do anything new or worthy……

Stop listening to voices of defeat, the enemy’s accusations that I’m no good, I’m unable, I can’t……

Instead choose to be like The Little Engine that Could, and face the uphill climb, the impossible dream, and “think I can!”

“I can do all things through Him who strengthens me.” (Philippians 4:13)